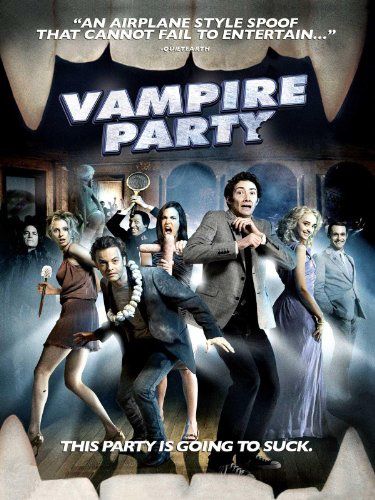 The annual “Medicis Night” ? What’s that ? For Prune, Alice and Sam, it looks like another great opportunity to party at an exclusive gathering for night owls. They managed to get hold of some VIP invitations and now they’re going. The Duke de Journiac warmly welcomes them at his castle. He’s the host of this mysterious party, which is meant for his kind to enjoy a good pint of hot blood… because they’re a bunch of blood thirsty vampires. When Prune, Alice and Sam realize they’re the main course, they desperately try to escape. As if it wasn’t enough to be a Bloody Mary on legs, they’re accompanied by a few other guests to slow them down. There’re Edouard, a boring civil servant, Krinine, a famous dentist, and Jessica, the token stupid blond gangster babe. A genre movie is still something very rare in French cinema. Les dents de la nuit, or Vampire Party is the debut feature of two advertising directors ; Vincent Lobelle and Stephen Cafiero. They got the job, because the producers thought they “combine an Anglo-Saxon intelligence and visual bravado with unusual casting, while adding just the right dose of madness.” We couldn’t agree more. Many actors are cast against type. Take Hélène de Fougerolles for instance. As she explains : “Jessica is a perfect moron, and she’s fantastic to play. If you have to interpret a retard, you might as well do it as plainly as possible, especially since the dialogues are so extreme…”