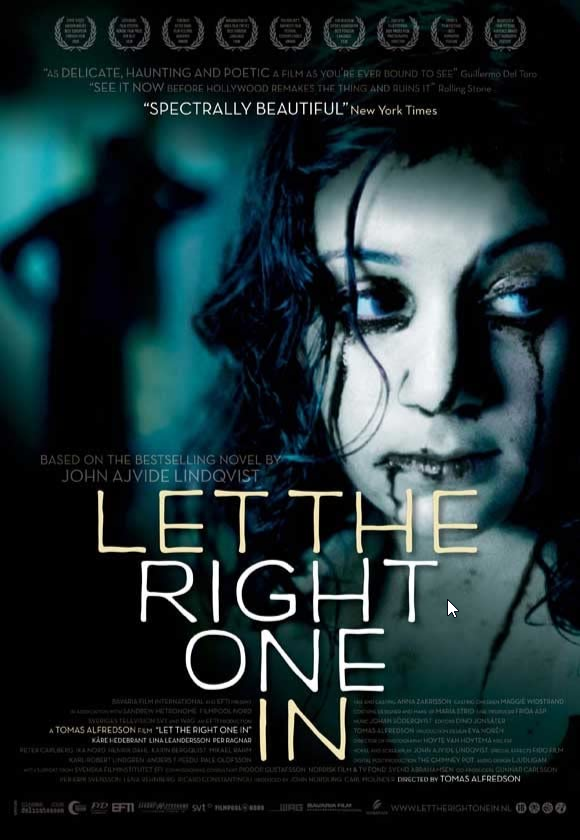 LET THE RIGHT ONE IN

The youngest among us might not realize that there was a time, not so long ago, when being nerdy and asocial was considered to be uncool Of course in those days – the 70ies – there were other imperfections, which little 12 year old Oskar manages to epitomize : wide ribbed corduroys, Emil Zatopek’s shorts, thermolactyl undies ( we’re in Sweden, after all ) and the Engelbert Humperdinck hairdo. That’s too much to bear for one single person and his fellow students make it known to him every day with some heavy-duty–punches-on-thenose. But Oskar knows that revenge is a dish that is best served cold, and he hatches up a plot with the help of this new neighbor Eli, also asocial – she only lives at night – and who is also twelve-plus years old, that is 200-plus to be precise. Just when we started to believe that fang flicks had definitely passed away, drowned in the libidinous vacuity of True Blood and the post-Buffy emo-kids of Twilight, salvation comes once again from Scandinavia. Celebrated wherever it was presented ( notably by our colleagues from Neuchâtel and Sitges where it swiped the Silver and Golden Méliès ), Let The Right One In does not only revitalize the themes of the genre. It also revives the deep melancholy that was present in Bram Stoker’s tale and blends it with style, joy and bitterness to reach a deeply distressing finale. Let’s not shun the well-worn phrase: it’s a masterpiece !