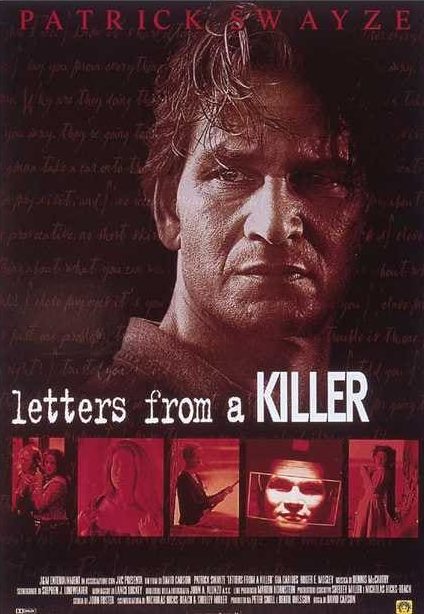 LETTERS FROM A KILLER

For every man on Death Row, there are a handful of people – some lonely, some seeking adventure – who will write or send tapes to him and develop intense fantasy relationships. But what if the relationship that forms between the prisoner and the woman on the outside gets out of hand ? What if she thinks she’s the only one, while in fact he is sending tapes to three other women ? What if, after a mix-up, she receives a tape from her “lover” meant for someone else ? For Race Darnell, facing death for the murder of his wife’s lover, the result is terrifying. When he receives a death threat while on Death Row, the irony doesn’t escape him. But when new evidence leads to Race’s release, he finds himself on the outside, and one of the women wants him dead. He turns detective. His plan is simple : go and see the women, find out which one is guilty. What he doesn’t count on is falling in love – genuinely – with one of them. Nor does he count on the murder of the other women, with evidence that makes him the prime suspect…
Tantalising suspense and relentless thrills in Letters from a Killer. Director David Carson made several episodes of well known television series such as Northern Exposure, L.A. Law and Star Trek : Deep Space Nine. He also stood behind the helm for the first long feature adventure of Jean-Luc Picard and his crew in Star Trek : Generations. Patrick Swayze (Ghost, Point Break, City of Joy) finds out that it’s death row on either side of the bars as Race Darnell. Trying to help him or kill him are Roger E. Mosley (Steel, Unlawful Entry), Gia Carides (Bad Company, Brilliant Lies, Lifebreath), Kim Myers (Nightmare on Elm Street II, Hellraiser : Bloodlines) and Bruce McGill (Timecop, Courage Under Fire, Lawn Dogs). Director of photography is John A. Alonzo (Close Encounters of the Third Kind, Scarface, Internal Affairs).