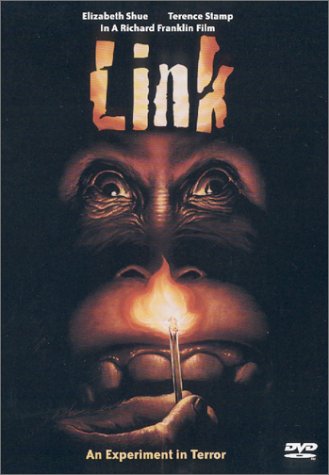 A famous anthropologist who got a PhD with a thesis about the missing link in Darwin’s evolution theory, is being visited by a young student. She becomes his assistant and participates in the execution of his revolutionary theories. When the pair is about to make a great discovery, the professor disappears. The young woman is left behind with three unusual lodgers. Link, who takes care of the house. Imp, a computer science genius and Vadou, who is locked up because of his aggressive behaviour. Three monkeys that were subjected to the professors experiments. Because of his disappearance the student will have to use all of her energy to stand up to the laws of the jungle, control… the laws of animal instinct. Director Richard Franklin left the directing for Psycho 11 to Anthony Perkins. Franklin is a director who apparently wants to explore new fields in fantastic film. After Psycho 11 and Patrick he hasn’t made it easy for himself. Link is an anthropological thriller that does not only excel in originality of screenplay but also in the nature of the protagonists.