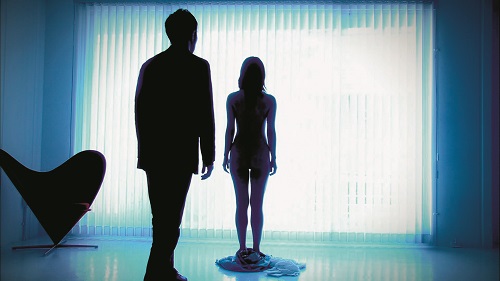 When her father dies, Mihiro doesn’t even have the time to bury him, as she gets raped repeatedly by his brother. She picks the maggots off her father’s face and has forced sex with her uncle on the hard wooden floor beneath the bed upon which her father still lays. Finally, she manages to kill her torturer. Leaving home for the first time of her life, she meets Hideki who struggles with his psychological chaos. He finds her torturing herself because of her trauma, and then he sacrifices himself for his “blood action painting” to share her sorrow and pain. They shut themselves up in the atelier and get absorbed in having sex. Realizing the blood rules their emotion and desire, they decide to cut their bodies and suck each other’s blood. They believe they will be spiritually one after connecting deeply enough. In his long feature debut Love Runs Faster Than Blood, Japanese director Hideki Kitagawa, a professor at the Tokyo College of Visual Arts and amateur painter and designer, examines a desperate love affair that is consumed to the limit. It’s exquisitely shot, every scene imbued with a magnetic beauty. Love Runs Faster than Blood is composed of dark settings that are almost unperceivable to the eye of the spectator, which depict the darkest and most daring moments of the characters, while the sparse moments of brightness mark the passages to freedom, which are equally rare. Kitagawa tells his story with very few cuts and brought dialogue to a minimum to add more value to the images, underscored by music from Aphex Twin and from Jaques Demy’s La Baie des Anges.