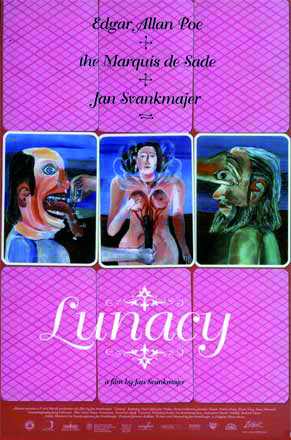 The 18th century. Jean Berlot is on his way to an insane asylum where his mother has died. Plagued by recurring nightmares of men in white coats, Jean’s nocturnal outbursts attract the attention of fellow traveller the Marquis, who offers the hapless man a lift. Hesitantly accepting the strange aristocrat’s hospitality, Jean spies his host conducting a debauched orgy in a chapel, with an obviously unwilling woman being forced to participate. The following day the Marquis apparently expires in a fit of apoplexy and is buried by his mute servant Dominic and Jean. But the following morning the master enjoys a banquet in the crypt. The Marquis explains his theory of “purgative therapy”. Fearing of being buried alive, he tries to rid himself of his phobia by having himself entombed. The Marquis suggests Jean tries the same method to end his fears of madness. From the legendary Czech filmmaker and animator Jan Svankmajer comes a truly surrealist movie experience, full of his trademark shocking and inexplicable imagery that is deeply troubling and at the same time compelling. His latest film Lunacy combines live action with strange animation sequences, full of cavorting raw meat, pig’s trotters, eyeballs and tongues skittering along surfaces and asks who is truly mad and who is truly free. Edgar Allan Poe’s tale The Premature Burial serves as the key plot device, with Svankmajer using it to explore Marquis De Sade’s questioning of good and evil. Fans of Jan Svankmajer are in for a real treat. Everybody else will discover a truly unique filmmaker at the height of his creative powers.