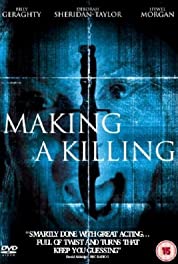 Jake Summers is having a passionate affair with his best friend’s wife, Madie. During one of their steamy encounters, a scream is heard from the forest; so Jake gives chase. But the killer is in Jake’s flat and Madie becomes the latest victim. When his betrayed friend Chad needs to pay off his debts, Jake’s guilt propels him to help out, reassuring him that the insurance money will cover it. But with Madie’s corpse still missing, there’s no proof of death and no pay-out. Jake visits his ex-boss Vic Travis at his video studio and an idea hits him. What if the murder had happened in the studio ? A camera might have caught the crime, proving to the insurers that Madie’s really dead. Jake comes up with a plan to get Chad his money. Vic will marry and his wife will be the next victim. Only the murder will be faked to create convincing video evidence. Vic isn’t sure it will work out, until he sees his beautiful new wife-to-be, Jake’s ex, Sarah Holdings. Then he’s in and the rehearsals begin. Making a Killing, by young British debut director Ryan Lee Driscoll, follows the grand tradition of film noir thrillers that keep the audience guessing until the final frames. The movie’s as sharp as the killer’s knife, with a script that reads like a roller coaster ride and lots of chemistry between the three leads; Hywel Morgan (TV’s Casualty) as Jake Summers, Bill Geraghty (Wilt) as Vic Travis and Deborah Sheridan Taylor (The Theory of Flight) as Sarah Holdings.