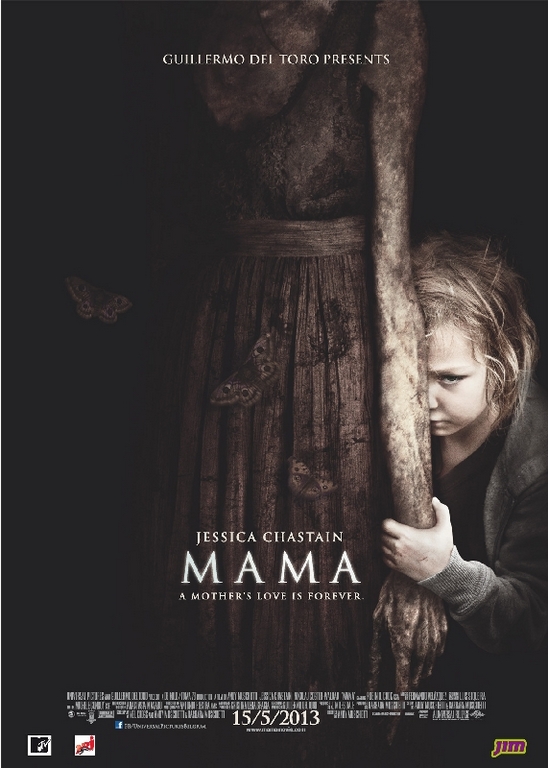 Mama is a ghost that is torn apart by grief for the children that were once taken from her. Now she’s bound to a remote cabin in the woods. When a depressive father arrives on the spot to take his own life, intending to take his two little daughters with him, Mama ferociously intervenes. Five years later, the authorities discover two feral children in the cabin. They move on all fours and are barely able to speak. Eight year old Victoria and six year old Lilly are physically healthy, but emotionally scarred. Psychologists think that they compensated for their isolation by inventing a fictional female protector. The girls move in with their uncle Lucas, a rock musician, and his girlfriend Annabel. It doesn’t take long before spooky things start to happen in Lucas’ mansion. Mama has followed her protégées and she has no intention to deliver them to their new surrogate parents without a fight. In 2008 Andres and Barbara Muschietti, brother and sister, realized a very frightening short about a ghost with overdeveloped maternal instincts. This longer version is as intense as the original and became a surprise box office hit in the States. The influence of executive producer Guillermo Del Toro doesn’t hurt, of course. Mama is stuffed with impressive and elegant visuals and introduces you to one of the most gruesome phantoms ever. Mama also benefits from the sex-appeal of Danish hunk Nikolaj Coster-Waldau ( Jamie Lannester from Game of Thrones ) as Lucas and scream queen Jessica Chastain ( Texas Killing Fields, Lawless, Zero Dark Thirty ) as Annabel.