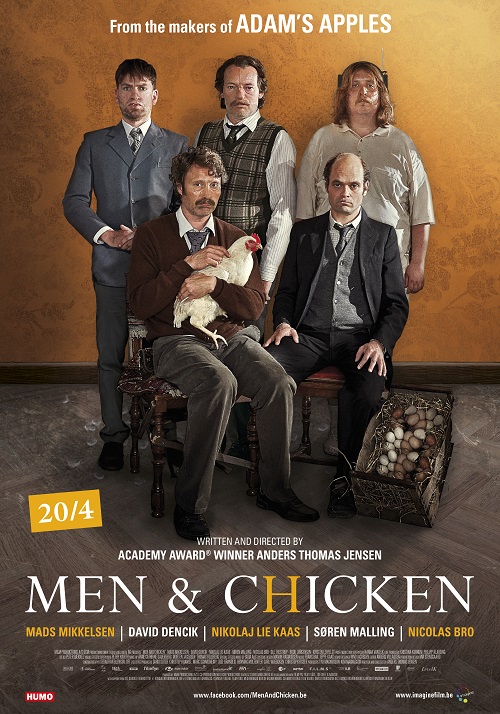 Nervous wreck Gabriel and compulsive masturbator Elias are half-brothers. When their father dies, he leaves a surprise for them; a videotape in which he announces that he’s not their real father. That seems to be an eccentric Greek scientist who leads a hidden existence on a small Danish island. There they’ll stumble upon an even bigger surprise. The rundown farm of their progenitor is not only home to numerous animals great and small, but also to three man who turn out to be their brothers. Just like Gabriel and Elias, they have a cleft palate, but they communicate mostly through verbal and physical violence. The duo attempt to bond with their siblings while trying to find out what their father was up to all these years; The truth will shock them to the core.

Anders Thomas Jensen is back! The only director to ever score a triple at the BIFFF (Golden Raven, Silver Méliès and the Audience Award for Adam’s Apples in 2006) treats us to another gem of a pitch-black comedy with fantastic undertones. Men and Chicken is absurd, obscene, hilarious and unforgettable. You won’t believe your eyes when you see how Denmark’s finest beat up each other with stuffed animals, transform a home for the elderly into a brothel, transgress the boundaries of decency and hygiene and create a breakthrough in human genetics. And we’re talking about Mads Mikkelsen (Adam’s Apples, Casino Royale), David Dencik (The Girl With The Dragon Tattoo, Tinker Tailor Soldier Spy), Nikolaj Lie Kaas (The Green Butchers, Angels & Demons), Sören Malling (Borgen, A Hijacking) and Nicolas Bro (War Horse, Adam’s Apples).