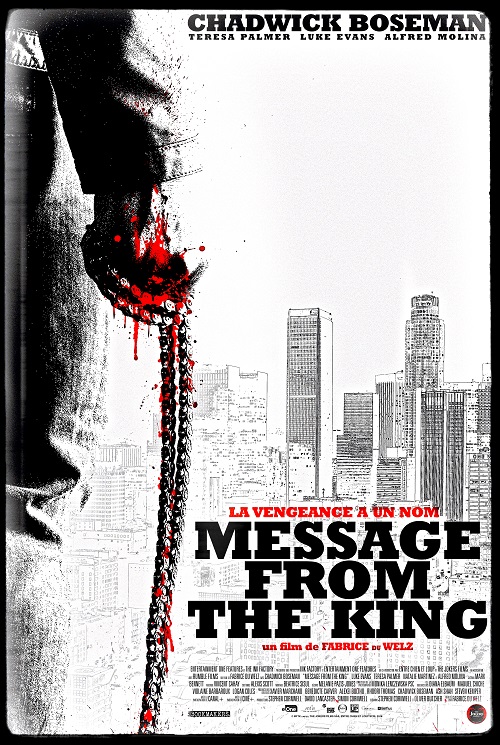 MESSAGE FROM THE KING

Jakob King lands in Los Angeles from Cape Town with only the
clothes on his body, a South African passport in his pants and 600 $
in his wallet. Customs give him the third degree, but the self-assured
King is not easily intimidated. Once out of the airport, he checks in at
the grungiest hotel in town. King has crossed the ocean in search of
his sister Bianca, of whom he hasn’t heard in a while. His quest brings
him into contact with a cross section of the inhabitants of the city of
angels: corrupt cops, failed actors, super-rich movie moguls, greedy
politicians, hookers and gangsters… Some of them will survive their
encounter with King, others will not, as he’s prepared to do anything
to find Bianca.
How do you deal with sorrow, guilt and loss in a world full of hurt
souls? British screenwriters Oliver Butcher and Stephen Cornwell
wanted us to show Los Angeles through the eyes of an outsider.
And our very own Fabrice Du Welz (Calvaire, Vinyan, Alléluia) was
the perfect man to visualize their story. The trio drew inspiration
from 70ties neo-noir thrillers such as Get Carter, Point Blank and Clint
Eastwood’s Dirty Harry franchise, Sergio Leone’s spaghetti westerns
and the violent epics from “Bloody” Sam Peckinpah (and especially
The Wild Bunch). Starring Chadwick Boseman (Black Panther from
the Marvel blockbusters), Teresa Palmer (Warm Bodies), Luke Evans
(Dracula Untold) and Alfred Molina (Raiders of the Lost Ark).