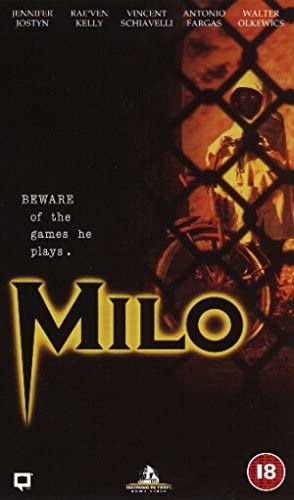 In a quiet suburban town, four young girls witness the brutal murder of one of their classmates at the hands of Milo, a mysterious young boy who lives on the other side of town. After the murder, Milo is found in a river and pronounced dead by his father, Dr. Jeeder. Sixteen years later, the four girls are still haunted by the brutal slaying of their friend, and the chilling vision of the murderer. The wedding of one of the four remaining girls draws them all together in the small town of their childhood trauma. Claire Mullins, a school teacher, takes a job and stays in town. Within a period of one week, the other three remaining girls are murdered. The small town is in disbelief after the recent events. Claire becomes obsessed with the reoccurring apparition of the demonic man/child Milo. She is convinced that he did not drown as a child. Fuelled by her fear, Milo begins to stalk her. Our heroine undertakes a horrifying and deadly odyssey as she uncovers the truth behind Milo’s birth.
Jennifer Jostyn (The Brothers McMullen) stars as Claire Mullins, who has to confront the evil Milo. Dr. Jeeder is a part by Vincent Schiavelli (One Flew Over the Cuckoo’s nest, Ghost).