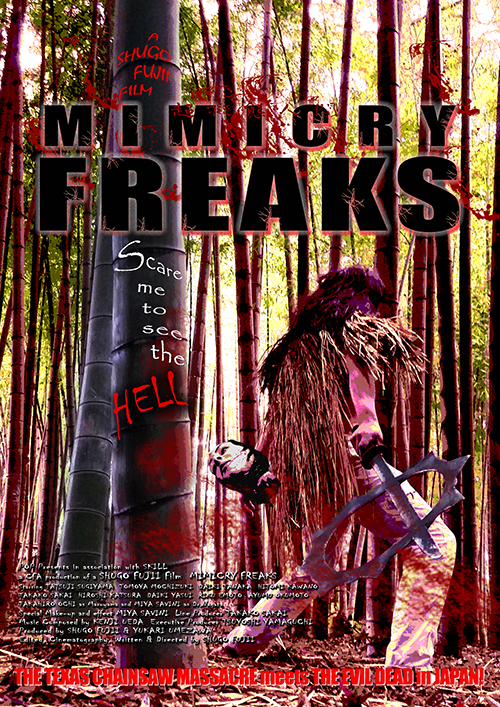 The sun drips through the foliage of a dense wood. Slowly and peacefully Fuma wakes up. Suddenly he realizes that he finds himself in the middle of nowhere in a virgin white king-size bed. Anxiously, he jumps up and finds his son standing next to him. He desperately shakes his kid and asks where in the love of God they are ? And why ? Not a single sound escapes his lips. Fuma starts running through the forest and sees a patrol car. Hysterically he asks for help and when the cop checks his ID with central, the officer can’t believe his ears : Fuma was once a convict on death row and was executed thirty years ago… Based on a famous Japanese drawing (named Kadan Shibusaenokizu) by Seiu Ito about abuse of minors, MIMICRY FREAKS disdains J-horror and focuses on the American codes of the genre. And those who mention the States, automatically say timeless references! CHAINSAW MASSACRE and EVIL DEAD take this crazy film over the edge, with a mix of mutations, massacres sponsored by everything you can find in the garden shed, blood that gushes through the air etcetera. Apparently, the conditions during the film shoot were so extreme that some team members went nuts…