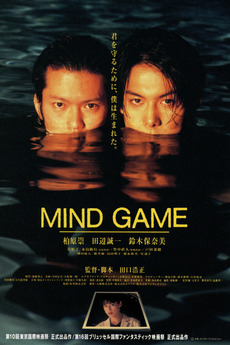 Kazuki Katayama, a psychotherapist working at a university hospital, comes across a patient named Jun Tadokoro who has multiple personalities. The doctor devotes himself to curing Tadokoro, but one of the patient’s personalities refuses to be cured, instead plotting a vicious psychological counter-attack. Katayama himself suffers from a trauma, which Tadokoro’s vicious personality senses and exploits. Meanwhile, the patient harbors a s ecret love for Kaori Misuzu, a researcher in the psychology department and Katayama’s girlfriend. But the devilish personality in Tadokoro also takes an interest in her.
In 1988 director Hiromasa Taguchi founded “Project Tention,” a theatrical troupe. He also formed a comic duo with Kazumasa Koura. In 1989 he started working as a film actor. Mind Game is his debut as a director. This psychological thriller brings us into a world where the borders of reality and imagination are fading and where human relations maintain a feeble balance.