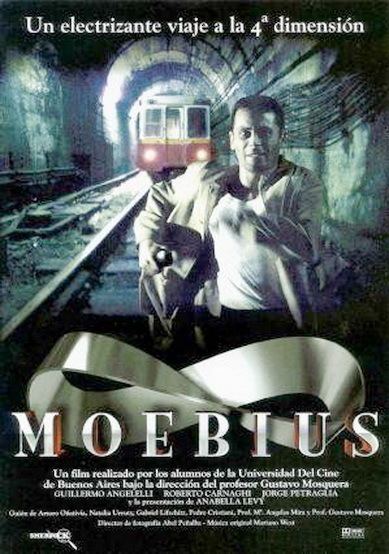 Daniel Pratt is a topographer called in by the Buenos Aires subway to solve an unusual problem: one of it’s trains, carrying 30 passengers, is missing. The subway system is so sprawling and complex that he must locate his former teacher Hugo Mistein, designer of the system, to calculate the seemingly infinite range of routes the train might have taken. Stanger still, though the train has disappeared, it can still be heard and felt; it’s existence is both philosophical and real. The missing train now exists in the fourth dimension of space and time. A group of hard-faced, besuited bureaucrats listens aghast to Daniel’s earnest explanation.
This engrossing allegory reveals how much the issue of “disappeared” political dissidents continues to obsess Argentinian life. Moebius is aesthetically unconventional filmmaking that makes its audience actively work to comprehend it. Moebius is directed by last year students from the Universidad de Cine of Buenos Aires. The exploration of the Borgesian questions about the nature of reality and existence make this film a stunning metaphysical ride. Moebius has “cult” written all over it.