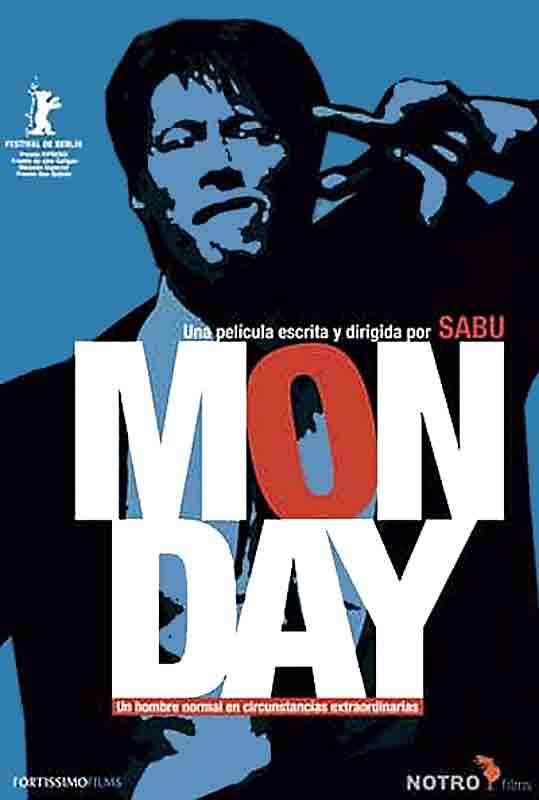 On one normal Monday morning, businessman Takagi wakes up in a hotel room. His memory is fuzzy. He has no idea of where he is, how he got there or what has happened the night before. Suddenly out of his pocket drops a bag of salt which says “purification salt”, the kind used in religious ceremonies after funerals and wakes to get rid of evil spirits. Slowly, his memories return and Takagi starts to recover more and more pieces of his lost weekend. As his past actions, from the brainless to the deadly, begin to impinge on his increasingly desperate present, the story moves towards an explosive and absurd finale. The ways of Japanese corporate society and its underworld shadow may still be mysterious to the West, but idiocy is universal. This is proven in Monday, the latest film of Sabu, director of such highly entertaining films as Unlucky Monkey, Postman Blues and Dangan Runner. The inept and bungling yakuza in Sabu’s films have won him acclaim and recognition as a subversive director. Unlike Takeshi Kitano, also known for his yakuza films, Sabu provides his films with a touch of comic relief. They often end on a note of anticipation with nothing resolved. He offers no ready solutions to the issues he raises, issues which confront contemporary Japan and the Japanese. Shinichi Tsutsumi as Takagi is a major reason the laugh meter keeps flicking forward. He’s accompanied by eccentric characters played by Yasuko Matsuyuki, Masanobu Ando (Kid’s Return) and Ren Osugi (Hana-bi).