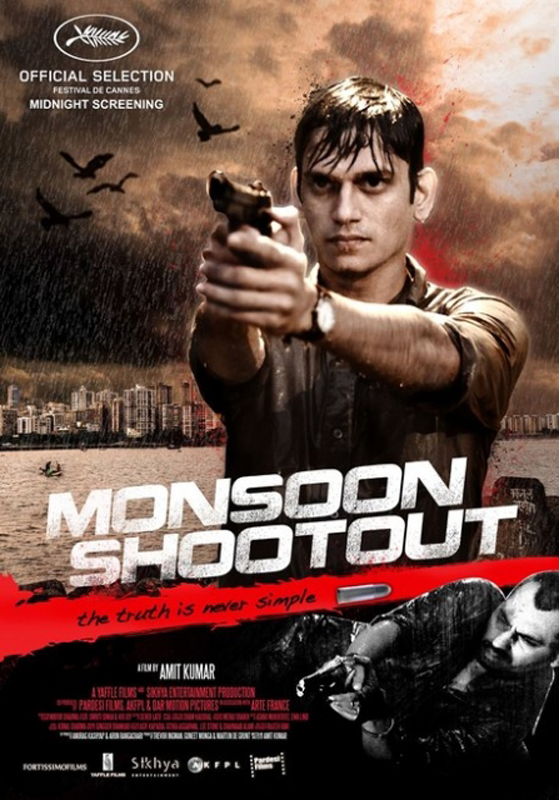 As the raging monsoon lashes Mumbai, the police force struggles to keep up with the gangsters who are more than ever emboldened. Adi, a principled rookie cop who has just joined the force finds himself enrolled in the Mumbai police’s antiextortion unit, which is led by Khan, a cop shaped in the ‘Dirty Harry’ mould. On the night of his first assignment, Adi had planned to meet and get back with his ex flame Anu. Unfortunately, that evening Khan had set up an ambush for a dreaded gangster and Adi misses the date. However, the ambush goes wrong and Adi finds himself chasing Shiva, a seemingly armed and dangerous criminal, into a dead-end alley. Unsure whether Shiva is indeed a wanted gangster, Adi has a moment of doubt; shoot or not to shoot. Whatever his decision, each choice will take him on a journey that puts him against a system which challenges his deepest moral codes. As he is forced to face the dramatic consequences of both of his decisions, he realizes that every choice has its price… And in doing so, Adi discovers that morality doesn’t come cheap. Moonsoon Shootout is a formidable stylish thriller with multiple plot lines that will delight movie buffs as well as a larger audience. It marks the long feature debut of Amit Kumar. Born in India, but raised in Africa, Kumar learned his trade in Europe, working as an assistant director for filmmakers such as Asis Kapadia ( The Warrior ) and Florian Gallenberger ( John Rabe ). It speaks volumes that the godfather of the Indian New Wave, Anurag Kashyap ( Gangs of Wasseypur, Ugly ) acted as co-producer. Add to this a socially and politically critical subtext that exposes the institutional dysfunctions of contemporary India and you’ve got one hell of a debut!