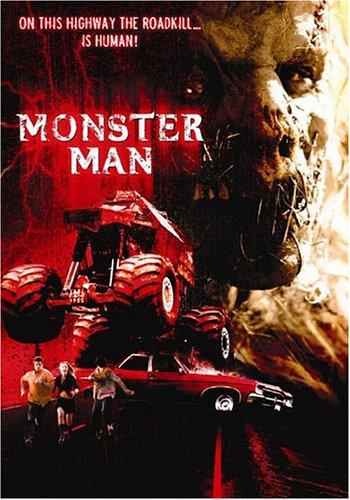 Adam and Harley are two college buds driving cross-country on their way to their love’s wedding with another man. In the middle of nowhere, a huge black monster truck rides up the ass of Adam’s car and nearly forces them off the road. Coincidence or bad luck ? Who knows, but it’s scary and weird. Trouble escalates from there. Finding road kill in their motel beds is half as bad as witnessing a murder executed by the scar-faced occupant of the monster truck. To complicate matters, there is the sexy but mysterious hitchhiker Sarah, who was discovered sleeping in the backseat of their car.

Monster Man is an outrageous teen horror comedy from director Michael Davis (Girl Fever, 100 Girls). Low on budget, but packed with ingenuity, gore and humour, this movie is a riveting cross between Duel and Jeepers Creepers. The cast are all veterans of the genre. Eric Jungman and Justin Urich, the two college palls appeared in Not Another Teen Movie and Carrie 2. Aimee Brooks, who plays sexy Sarah, starred in Hillside Strangler and the monster man himself, Michael Bailey Smith, is a seasoned latex-wearer for films such as Men in Black II and Black Mask 2.