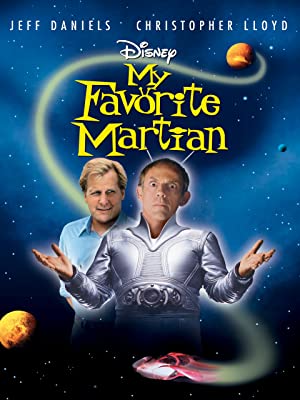 Ambitious television reporter Tim O’Hara stumbles upon a “Martian” whose space ship has accidentally crash-landed on Earth. Thinking this is the story of the millennium and his Pulitzer Prize, Tim makes plans to expose the Martian who, posing as Tim’s Uncle Martin, takes human form and has plans of his own. Obviously, Uncle Martin doesn’t want to be identified. In fact, all of Tim’s efforts to divulge the truth are systematically thwarted by the resourceful alien who ultimately recruits Tim to help him repair his ship for a return to Mars. They eventually become pals and join together to overcome the many hilarious obstacles that confront them along the way.
The intergalactic comedy My Favorite Martian is a big screen adaptation of the classic television series from the sixties. Director Donald Petrie seemed to be the right man for the job, having experience with television and with comedy. He made several episodes of popular series such as L.A. Law, McGyver, Amazing Stories and Chicago Hope. Furthermore, he directed the legendary couple Jack Lemon and Walter Matthau in Grumpy Old Men. Jeff Daniels (Pleasantville, Dumber & Dumber, Speed) desperately tries to prove as Tim O’Hara that his Uncle Martin – played by Christopher Lloyd (Back to the Future, Who Framed Roger Rabbit, The Adams Family) – is an alien from another planet. There are assisted by Elizabeth Hurley (Austin Powers, Passenger 57, Mad Dogs & Englishmen) as Brace Channing, Daryl Hannah (Blade Runner, Splash, Attack of the 50Ft Woman) as Lizzie and veteran actor Ray Walston (The Sting, Paint Your Wagon, The Appartment), the original “Martian” from the series, as Armitan. Sherri Stoner & Deanna Oliver (Casper, the Friendly Ghost) wrote the screenplay.