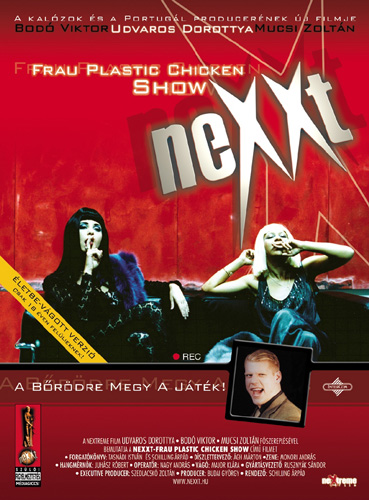 With her regular groundbreaking television series, one of the world’s most popular and influential media personalities uncovers the mysteries of the nature of evil. Frau Plastic Chicken’s mission is to explore the evil that resides within every one of us. And so she invites as her special guest the fictional rebel of the sixties, Little Alex. The hero of A Clockwork Orange has since done pretty well for himself. He has a job, friends, a wife and kids. Alex helps her explore the inner workings of a serial killer captured by a live camera crew. Now the studio is home to two criminals from two different eras, all conducted by the first lady of live television. A good time is promised for all. After a while, however, the Show’s strict rules change and things take an interesting turn.

Nexxt – Frau Plastic Chicken Show, the first feature film of Hungarian director Arpad Schilling, is a sharp, often hilarious and absurd dissection of the media’s willingness and the audience’s obsession with the massive bombardment of accidents, disasters, carnage, epidemics and murders that are each day broadcasted life on our television screens. Although made with limited means, the movie is intense and original, benefiting from excellent acting, a solid musical score and captivating cinematography. Dorottya Udvaros (Colonel Redl, Meeting Venus) steals the show as extravagant TV show host Frau Plastic Chicken