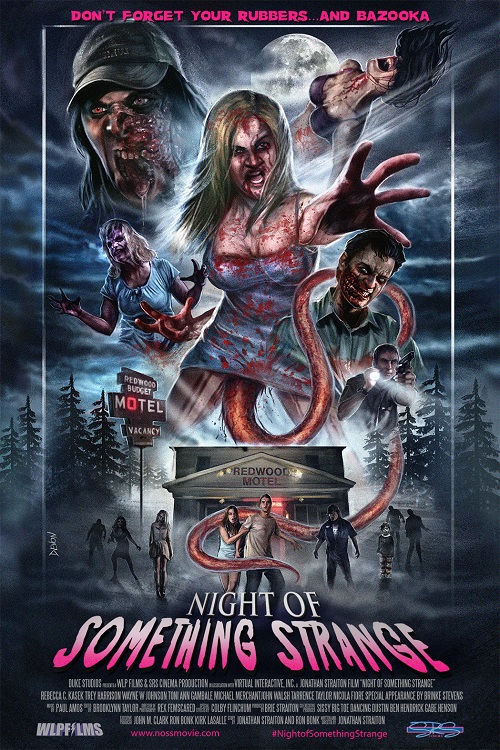 NIGHT OF SOMETHING STRANGE

Here comes Spring Break! For Christine, Samara, Freddy, Jason
and Brooklyn, this is the opportunity to hit the road for a crazy holiday.
If the girls are already sipping a Dr Pepper while thinking about
coconut oil on the beach, our three males have definitely decided to
let their hormones rage. That coconut oil will be used for something
else than preventing sunburns… But that’s without counting a first
stop at a shabby motel, where a particularly ferocious STD has recently
transformed into a concierge with nymphomaniac tendencies.
The infection spreads through orifices which decency prevents us
from naming. With young, adolescent flesh being incredibly weak,
our horny youngsters will have to face trouser snakes with teeth.
The night is going to be a real fiesta of body fluids, which will make
a prison shower look like a little harmless massage.
Are you nostalgic for the good old days of John Waters when everything
was allowed and no taboo was safe? Then Jonathan Straiton’s
new film is something for you. Night of Something Strange is one
classy pinata of bad taste spilling politically incorrect candy at every
blow. Gore, sex, silly jokes; this movie has the finesse of a horny
baboon that shows no restraint. The film scandalized quite a few
spectators in the United States who seemed to have forgotten what
a true Midnight Movie is. Well, this dose of midnight madness is
so generous that it would vaccinate a horse for ten years!