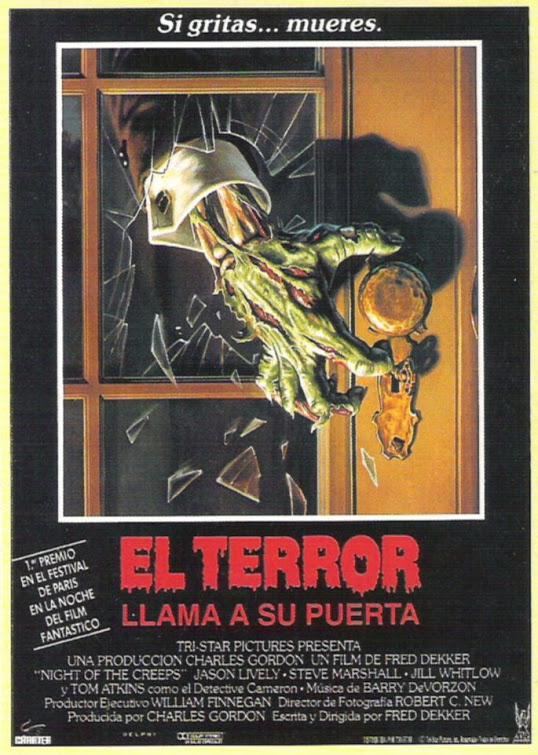 NIGHT OF THE CREEPS

Aliens are running after each other in poorly-lit corridor. One of them gets stuck but manages to send out some genetic junk into the atmosphere… the poisoned gift is left stranded in the meadow of a tiny village in the USA: Sonority Row.
It’s the middle of the Beach Boys period with hair gel and white ankle socks, the beginning of the ‘50s. Johnny and Pam are thinking about an early experiment regarding “sexual liberation” when a mysterious glow distracts them…
“Night of the Creeps” does not stay in the ‘50s for too long. We quickly jump into the ‘80s and meet Chris Romero, J.C. Hooper, Cynthia Cronenberg, Brad Craven and many more…
You must have guessed it, this night drowns in private jokes. It is a tribute to the fantastic genre, from the old-fashioned science fiction of the ‘50s to the recent (and bloody) Core.
With “Night of the Creeps” Fred Dekker, screenwriter and director who was already behind the great “House” is giving us his first movie. As needed, he surrounded himself with renowned actors and workers: David Miller (“Nightmare on Elm Street”) was in charge of the special effects, Jason Lively (“Brainstorm”, “National Lampoon’s European Vacation”) plays Chris Romero and Tom Atkins (“Creepshow”, “The fog”, “Escape from New York” ) plays Ray Cameron.