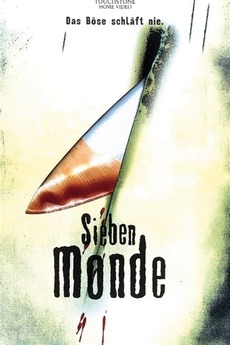 Murders in the city. Animal hair is found at the scene of the crimes… wolf hair. Could it be from werewolves ? Thomas Krömer, a writer, is attacked from behind during a full-moon night. He’s bitten in the neck. The animal disappears unseen into the woods. Later, when his grandmother is found horribly mangled, he begins to believe that he might be a werewolf. And since werewolves don’t know what they have done afterwards, Thomas begins to search. He wants to find out what really happened during the night of the murder and what is happening to himself. The conclusions which he comes to, are appalling. Each piece of evidence points towards his guilt. And to his otherness… the beast within him. His initial shock at this realisation is replaced by a feeling of a yet unknown level of consciousness. Thomas wins the heart of Alexandra, the woman he had secretly desired for a long time. Wanting to protect her and be absolutely certain about himself, he attempts to document his transformation into a werewolf during the full moon. Thomas has to catch his breath when he finally finds out the truth about himself and the series of murders. For reality has taken over and is worse than all fantastic mythical creatures could ever be…
Werewolves galore… or not ! ? Hair-raising tension is guaranteed in the exciting German thriller Nicht Time. Director Peter Fratzscher (Panische Zeiten, Asphaltnacht, André Schafft Sie Alle) is not unfamiliar to tight plots, having directed numerous episodes of the popular German crime-series Tatort and Ein Fall für Zwei. With Sieben Monde he wanted to created an atmospheric mystery thriller within a genrefilm. By playing with the conventions and the rules of the genre, he succeeds in manipulating our expectations and manages to keep us surprised till the very end. His talented cast was essential to this. Popular German actor Jan Josef Liefers (Rossini oder die mörderische Frage wer mit wem schlief, Knockin’ on Heaven’s Door) is very convincing as the writer who tries to find his inner-wolf. Marie Bäumer, who became a star overnight with her part in Til Schweiger’s popular comedy Männerpension, sparks as the beautiful passionate Alexandra. Also watch out for Peter Lohmeyer (The Killer Condom !) as Chief Commissioner Graf.