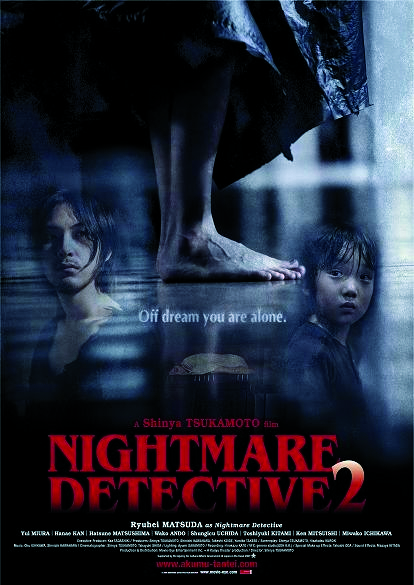 All Kyoichi Kagenuma wants is to be left alone with his own nightmares and misery, debating suicide as a means to end it all. But solitude will not come, as he has to take up his role of Sherlock Freud again. Harassed by Yukie, a sleepless schoolgirl whose nights are haunted by a dead fellow student, he becomes intrigued by her dreams; especially as her nightly fits of madness strangely resemble those that tormented Kyoichi’s mother. Through his enquiry, he might catch a glimpse of his own fears. Festival favorite Shinya Tsukamoto scored a hit with “Nightmare Detective” part one. By respectfully following the requirements of teenage horror, his film was as accessible as it was frightening. Yet he managed to inject plenty of strangeness and torment into the feature. Now, freed from the box-office syndrome, Tsukamoto manages to offer an even richer, more audacious experience. As he focuses more on the inner demons of his protagonist, he adds a surrealistic coating to the style of the film, strengthening the beauty and force of his direction.