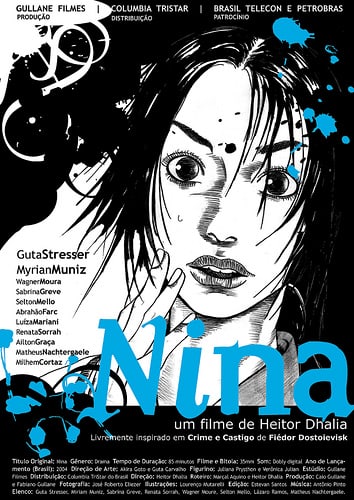 Nina is a poor illustrator, living in the big metropolis of Sao Paulo. She rents a room from Eulalia, a bitter old hag. Due to her habitual drug use, she looses her job, which was also her only viable source of income. With Nina constantly behind on the rent, Eulalia starts a sadistic power game with the struggling young girl. She labels every piece of food in the freezer and forces her to perform demeaning choirs. Nina does her best to survive, from selling her underwear to a sexual pervert to stealing the wallet of a blind one-night stand. Pressured by Eulalia and emotionally exhausted, Nina becomes unbalanced. The self-destructive impulses that have always lurked deep within her mind, can no longer be stopped. The conflict with Eulalia reaches its climax and Nina plunges into a violent fantasy world. Nina, the award winning feature film debut of Heitor Dhalia, is a refreshing piece of modern Brazilian cinema. Our heroine faces the same moral dilemma’s as Raskolnikov in Dostojevsky’s Crime and Punishment. Her downhill ride into a nightmarish universe filled with absurdity and horror is portrayed with style and originality by Dhalia. Manga-like cartoon pop ups, gloomy production design and a pulsating techno soundtrack complete this chilling tale of contemporary urban isolation.