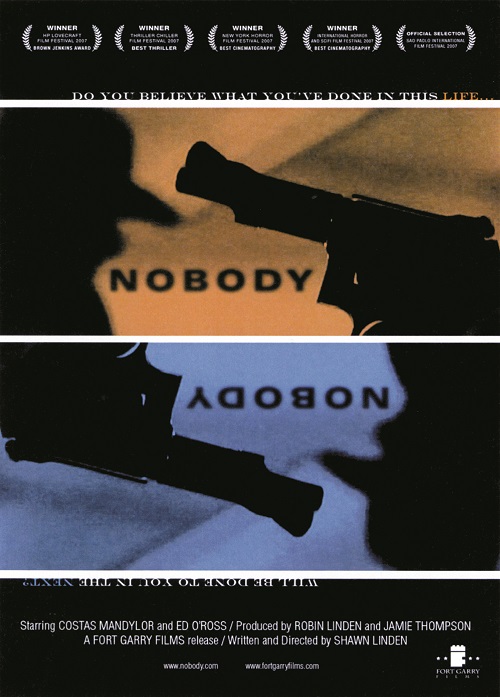 The 1950ties. A cold winter night that never seems to end. A black-faced assassin is consigned to commit a murder at the request of mob boss Rolo Toles. The assassin returns to Rolo claiming success, but the paranoid mobster needs more proof than the killer can provide. The assassin escapes into the city with a mysterious package under his arm, but before he can make it to safety he is attacked, pursued and wounded by an assailant who seems to anticipate his every move. He escapes with his life, but a phone call from Rolo confirms the impossible: his mysterious wouldbe victim is still alive. The assassin returns to the scene of the crime, a deep grave nestled in a snowy park. The grave is empty. From this moment, time folds in on itself. The faces he had just met no longer remember his. The wounds he had so carefully tended to, have now vanished from his skin. The assassin gears up for a fateful confrontation with his assailant. Nobody is a neo-noir nightmare with superb acting, cinematography, art direction, sound design and a labyrinth-like story that mercilessly draws you in from the first frame to the last. It’s a terrific debut feature for young Canadian helmer Shawn Linden, who also draws great performances from his two main protagonists, Costas Mandylor ( Saw, Beowulf ) as the assassin and Ed O’Ross ( Full Metal Jacket, Dick Tracy, Universal Soldier ) as Rolo Toles. If you love weird tales, film noir, and time paradoxes, then Nobody is just the kind of film for you.