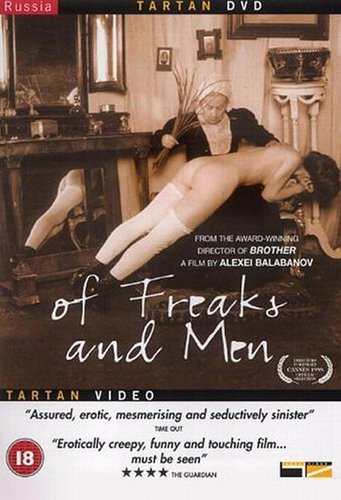 OF FREAKS AND MEN

St. Petersburg at the beginning of the 20th century. Johann and his assistants specialise in the fabrication of erotic photographs depicting the flogging of bare-bottomed women. Handsome and secretive, Johann and his creations gradually penetrate the peaceful households of two Russian families. First there are the upper-class Stasovs, who consist of Dr. Stasov, his blind wife Ekaterina and a pair of Siamese twins from Mongolia whom they adopted seventeen years ago. The second family is more modest in origins. Radlov is an engine driver who lives with his daughter Lisa, a dreamy woman of twenty years old. If there is someone Lisa hates, it is the maid of the house, Grunya, who became her father’s mistress when her mother died. She also suspects Grunya of having an affair with Johann. But he is more interested in Lisa. She would be the perfect prey for his perversions.
Despite the catastrophic economic situation, there are still inventive films being made in Russia. Shot in the famous style of the classical portraits by the turn of the century and with a poker-faced irony, Of Freaks and Men is a dazzling perverse black comedy. Director Alexei Balabonov started as a documentary filmmaker. He made his first long feature film, Happy Days, in 1992. This was followed by The Castle in 1994 and Brother in 1997, which gained him world-wide attention. It became Russia’s biggest box office hit and made its world première at Cannes in the Quinzaine des Réalisateurs. Brother went on to win the Special Jury and Fipresci prizes at the Turin Film Festival and received Best Actor Awards from Chicago and the Russian Critics Guild. His newest film, Of Freaks and Men, is a haunting melodrama of hidden passions and sadomasochistic urges. In this bizarre tale, manipulations and revenge rule amidst the charm, innocence and perversion of days gone by.