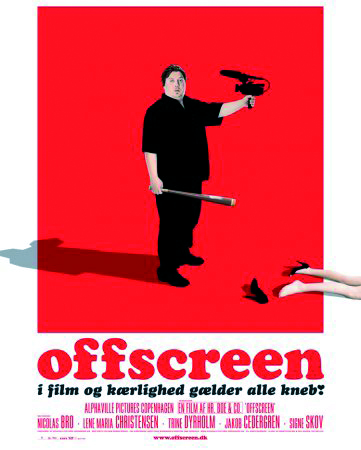 Well-known Danish actor Nicolas Bro’s marriage is on the rocks. His wife Lene has grown tired of their relationship. Instead of grabbing the bull by the horns, Bro decides to save his marriage by filming a love story with him and Lene playing the lead roles as themselves. Bro’s good friend, director Christoffer Boe, lends him a camera and suggests he films everything, a piece of advice that Bro takes far too literally. His constant filming succeeds in driving both his friends and wife nuts and Lene ends up moving to a secret address in Berlin. Obsessed by the idea of completing his film, Bro hires an actress to play his wife. Alas, nothing goes according to plan and Bro’s last hope of reclaiming his lost love is to seek out Lene in Berlin. It’s a journey that gradually causes Bro to come apart at the seams in his increasingly desperate attempt to register his life on film. Movies are the best way to experiment with the limits of reality. This is proven in Christoffer Boe’s third feature Offscreen. Not being afraid to experiment and to take risks, he turns away from the distinctive visuals of his first two films, Reconstruction and Allegro, and opts for a scruffy, ultra-realist look. Nicolas Bro ( The Green Butchers, Allegro, Adam’s Apples ) reigns supreme as himself. As lead actor and cinematographer, his obsessive self-filming is so hair-raisingly private and creepy that it becomes impossible to separate fact from fiction. Offscreen is the perfect film for those that like their movies provocative, daring, intense and far removed from the mainstream.