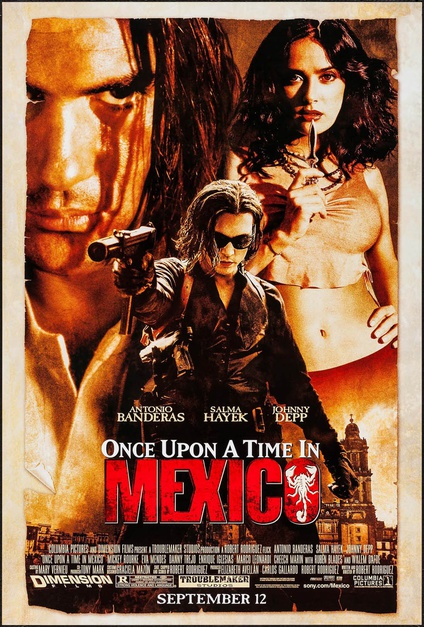 ONCE UPON A TIME IN MEXICO

Haunted and scarred by tragedy, El Mariachi has retreated into a life of isolation. He is forced out of hiding when Sands, a corrupt CIA agent, recruit’s the reclusive hero to sabotage an assassination plot against the president of Mexico, which has been conceived by the evil cartel kingpin Barrillo. But El Mariachi also has his own reasons for returning : blood revenge. The desperado returns with his two trusted sidekicks Lorenzo and Fideo. And the legend of El Mariachi reaches new heights of excitement and adventure.

Once Upon a Time in Mexico is the third part in the saga of the mythic guitar-slinging hero El Mariachi, conceived by director Robert Rodriguez (From Dusk Till Dawn, The Faculty, Spy Kids) in 1992 with the no-budget hit El Mariachi and continued in 1995 with Desperado. Once Upon a Time in Mexico is an exciting, action-packed tribute to the kind of movies that inspired Rodriguez to become a filmmaker, like Sergio Leone’s spaghetti westerns and George Miller’s Mad Max films. Starring Antonio Banderas (Desperado, The Mask of Zorro), Salma Hayek (From Dusk Till Dawn, Frida), Johnny Depp (Ed Wood, Sleepy Hollow) and Mickey Rourke (Rumblefish, Angel Heart).