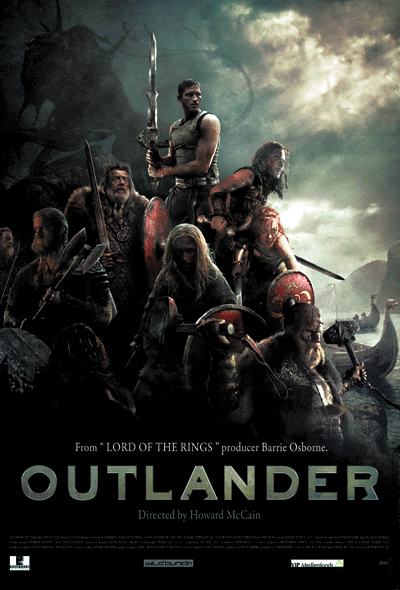 A space craft crashes into the majestic fjords of ancient Norway and into the time of the Vikings. From the wreckage emerge two bitter enemies : a soldier from another world, Kainan, and a bloodthirsty creature known as the Moorwen. Man and monster both seek revenge for violence committed against them. As the Moorwen ravages the Viking world, killing everything in its path, Kainan forms an unlikely alliance with the primitive but fierce warriors. Combining his advanced technology with ancient Iron Age weapons, the hero leads a desperate attempt to kill the monster before it destroys them all. Alien meets Beowulf seems like an improbable combination, but debuting director Howard McCain, screenwriter of Underworld : Rise of the Lycans and the upcoming Conan movie, has managed to pull it off. You’ll hugely enjoy seeing savage, primitive Vikings with swords and axes paired off against an impressive cgi-creature. But Outlander isn’t just all action and bloody mayhem. As the story develops, we find out that our hero Kainan, played by James “The Passion of the Christ” Caviezel has a dark side and the “monster” has its reasons to be so pissed off. You can also count on some solid performances by John Hurt ( The Elephant Man, 1984 ) as an aging Viking king, Sophia Myles ( Underworld, Tristan + Isolde ) as his free spirited daughter and Ron Perman ( Hellboy, The Mutant Chronicles ) as a warrior with a score to settle.