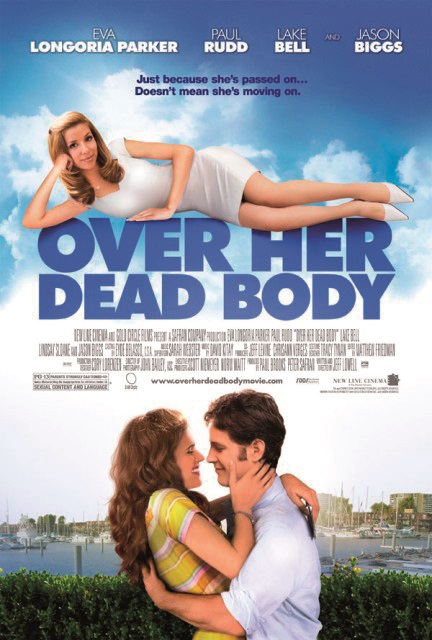 OVER HER DEAD BODY

Just before her wedding to Henry, Kate drives the caterers and everyone else mad with her endless meddling. Mortified that the ice-sculpture angel she’d ordered arrives without wings, she orders to haul it away. But it accidentally falls on her, abruptly terminating more than just the nuptials. Waking in an all-white limbo, Kate proves so indignant and argumentative with a real angel that she’s sent off, neither to heaven nor hell, just off, without the “orientation instructions” the angel gave up trying to give her. A year later, Henry’s sister Chloe wants to get him out of his funk and back onto the dating scene. She figures he needs closure and badgers him into an appointment with Ashley, a part-time psychic. Henry finds himself falling hard for Ashley and vice versa. But there is a big snag. Ashley is being haunted by Kate’s ghost, who considers it her heavenly duty to break up Henry and Ashley’s fledgling romance, if it’s the last thing she does on this earthly plane. Eva “Desperate Housewives” Longoria stars in the romantic fantastic comedy Over Her Dead Body, the directorial debut of Tv-writer Jeff Lowell, who also scripted John Tucker Must Die. Prepare yourselves for a supernatural love triangle with plenty of laughs, slapstick and a very bitchy ghost. Paul Rudd ( The 40 Year Old Virgin, Knocked Up ) shows his comic talents again as Henry. Lindsay Sloan ( Bring It On, The In-Laws ) plays the haunted Ashley and Jason “American Pie” Biggs is Dan, Ashley’s best gay friend.