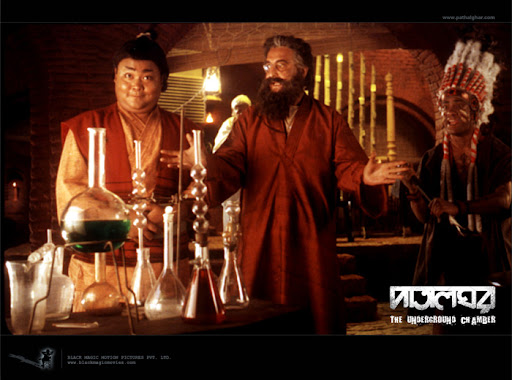 Long ago, in the small village of Nischintipur, there lived an eccentric scientist called Aghor Sen. While trying to invent a rat disposal machine for his loving but nagging aunt, he accidentally designs a device which, through the use of sound waves, can put people and animals to sleep. Vik, an exile from the planet Nyapcha, lands with his spaceship near Nischintipur. His surveillance equipment picks up the existence of the sleeping machine. Realizing its potential, he tries to steal the weapon so that he can go back to his planet and avenge his exile. Instead, he is put to sleep by Aghor Sen and left in his spaceship. 150 years later. Vik is still sleeping and Aghor Sen’s invention has once again aroused interest from some very dangerous people.

Pathalgar could be called the first truly Indian sfi-fi movie and that, coming from a country with the biggest film production in the world, is no small feat. Pathalgar has something for everyone : spy thriller excitement, aliens, ghosts, action, song and dance, comedy, pathos and hard truths. Director Abhijit Chaudhuri portrays a world that is obsessive about arms, violence, technology and power, where innocence is threatened to be lost in an increasingly cynical world.