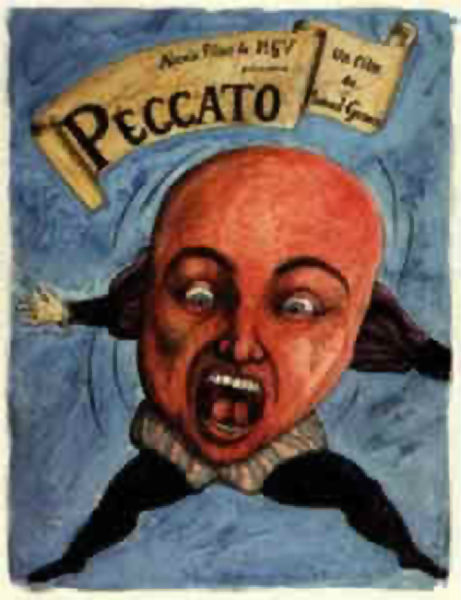 Like everyone, Angelo Peccato was born into sin, but not like any baby. For he was born on a Monday, closing day at the museum. A lustful father had impregnated and then abandoned his voracious mother. The bloated glutton, in her lethargy, had given birth to him in a ditch… The story of il signore Peccato, an architect in the Middle Ages, and his long journey through the world of sin. In his efforts to realise his dream of building a cathedral, he endures seven testing adventures. Metamorphosed into an iconoclastic killer and projected into the 20th century, Peccato takes his revenge by endeavouring to exterminate the instigator of his sufferings: “The Seven Deadly Sins”, the mysterious painting by Hiëronymus Bosch. But wrath, pride, lust, sloth, gluttony, avarice and envy make short and bloody work of this naive dispenser of justice.
In the world of experimental films Manuel Gomez has his own place. He directed some remarkable short films such as the animation film “L’encadré”, which was entirely composed of polaroïds, “Ubu”, animation with pieces of meat, and “Very Important Image”, the shortest film in the history of cinema. With Peccato he brings us his first long feature. It’s a kind of mystic road movie in seven chapters, inspired by the famous Bosch’ painting “The Seven Deadly Sins”.