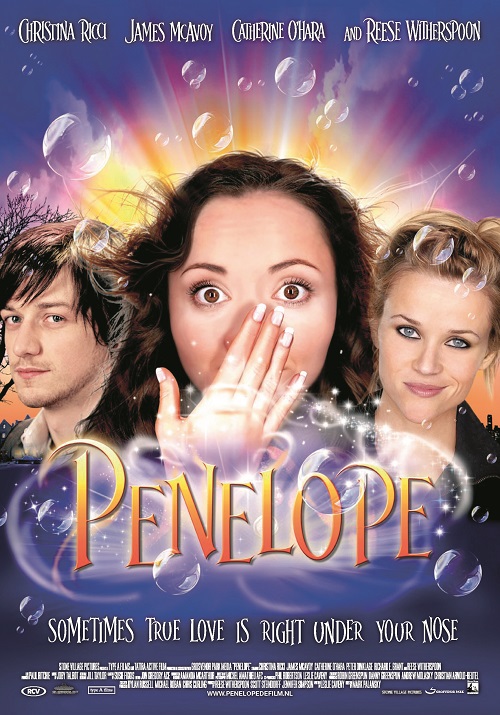 Penelope, the daughter of blueblood socialites, was born with the snout of a pig, the result of an ancient family curse. Hidden from a world of prying tabloids by her overbearing mother and addled father, she believes the curse can be broken only if she marries one of her own kind. A long line of society suitors is assembled, but one look at her nose makes them all bolt. Among those making a hasty retreat is big-business scion Edward Vanderman, whose claims of the encounter get him branded a loony. He tries to prove his sanity by sending an undercover reporter to woo Penelope in order to obtain her picture. When she finds out, she flees into the outside world, in search of true friendship. In the modern fairytale Penelope, first-time director Mark Palansky uses an eccentric visual style to invent a richly imagined canvas that blends old worlds and new. The film transforms London into a fantasy realm. Old city landmarks and stately streets are folded together with a sleek modern skyscape, juggling splendour with grime, fairy-tale quaintness with 21st-century style and a lush score adding to the attractive package. Palansky draw on everything from Beetlejuice, Edward Scissorhands and Big Fish to recent fairy-tale updates such as Shrek, The Princess Bride and Ella enchanted to create a sweet and enchanting story. Starring Christina Ricci ( Sleepy Hollow ) as Penelope and James McAvoy ( Atonement ), Richard E. Grant ( Dracula ) and Reese Witherspoon ( Walk The Line ), who also co-produced the movie.