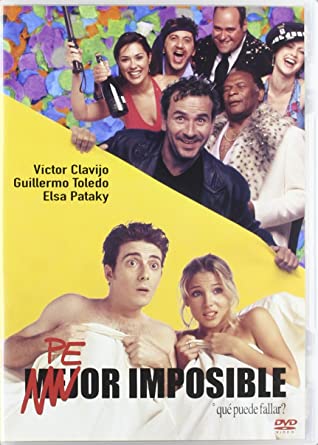 Upon returning from their honeymoon, Anna and Carlo unpack their luggage… and find 250.000 Euro. Anna is determined to keep this unexpected wedding present and buy a flat. But the owners of the money, two gangsters called Carmine and Jack, appear and take advantage of the house-warming party to get into the place. Myrna Sharp, a friend of Anna, meets Carmine and falls in love with him at first sight. And when Myrna has the hots for someone, it’s really hard to get rid of her. But then, Carmine disappears in mysterious circumstances. Anna and Carlo now know they’re being chased and decide to take shelter in the secluded mountain house of Anna’s brother Claudio. But Jack, with Myrna as a hostage, is right behind them. Claudio, a writer, is working on a book. Suddenly the story starts wri-ting itself. Is he endowed with special powers or is there a ghost that is whispering to him what’s about to happen? Peor Imposible is a supernatural Italian comedy thriller by director-actor Marcello Cesena (Story of Boys and Girls, Magnificat). This magical story of urban madness, where everything is possible even if it’s improbable, serves as a comic metaphor for the confusion caused by the European Union. The story could take place in any country where fate has put a shitload of money in the hands of two ordinary people. Cesano infuses his tale with big doses of cynicism and irony, transforming it into a deranged and surrealist comedy. With Rossy De Palma (Prêt-à-porter, La flor de mi secreto)