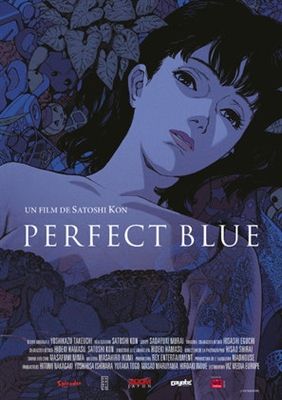 Mima Kirigoe is an unsuccessful pop singer. Faced with her lack of popularity, her manager advises her to drop music and to develop her talents as an actress. She obeys her agent and gets a part in a TV serial. Depressed and frustrated by the failure of her singing career she is confronted with some strange events. She discovers a young girl, looking exactly like her, invisible to all but herself. Mima also finds out that every tiny detail of her life is accessible on the Internet. She’s slowly gripped by a paranoid fear that will take her in the realms of schizophrenic madness. Working hard she tries to control her emotional fragility and psychological instability. But a number of mysterious incidents and the chilling resemblance between her own life and that of the character she plays on TV make it very difficult for her to make the distinction between fiction and reality.
Perfect Blue is the first animated psychological horror film. It was produced by a brand new Japanese production company. Prestigious creators of Japanimation as Katsuhiro Otomo (director of Akira, Memories), Satoshi Kon (script writer of Memories) worked on this project. Roger Corman calls Perfect Blue “a startling and powerful film. If Alfred Hitchcock partnered with Walt Disney, they’d make a picture like this.”