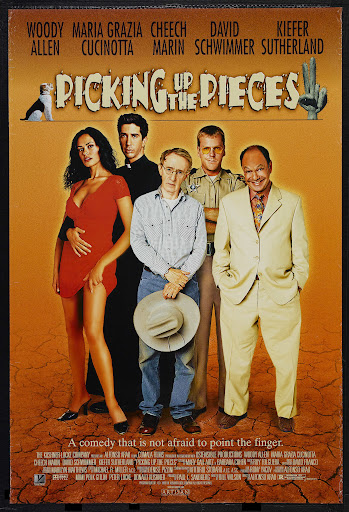 PICKING UP THE PIECES

Tex, a kosher butcher from New York under the witness protection program in Arizona, has a problem. He’s just killed his wife, Candy, in a jealous rage, after discovering she’s having an affair with the local Sheriff. He’s cut her body into pieces and has taken them to the Mexican border, but he’s lost one of her hands! A blind old village women stumbles upon the hand, hits her head and miraculously regains her eyesight. Soon thousands are flocking to the local church to see the hand of the “Madonna” and miracles are granted to all who ask. But the village priest, who is in love with the town hooker, senses that the hand’s origin is not quite “virginal”. Tex, the Sheriff, and the priest all want something done with the hand, and the unpredictable outcome proves to be both magical and hilarious. Alfonso Arau, the critically acclaimed director of Like Water for Chocolate and A Walk in the Clouds has directed an enchanting, mystical comedy. For once Woody Allen lets himself be directed as Tex. Sharon Stone can be glimpsed in a short cameo as Candy. The delicious Maria Grazia Cucinotta (Il Postino, The World Is Not Enough) plays the town hooker, causing a crisis of faith in the village priest, a part by David Schwimmer (Ross from TV’s Friends). Kiefer Sutherland (A Few Good Man, The Three musketeers) plays the local Sheriff. The beautiful images are courtesy of award-winning cinematographer Vittorio Storaro (Bullworth, Little Buddha, The Sheltering Sky).