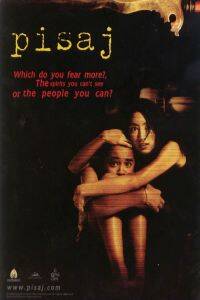 After her parents are murdered in a drive-by shooting, the shy Oui is taken in by her distant aunt Bua, who lives in a rundown Bangkok printing factory. Buau gives young Oui the job of taking care of her stubborn introverted grandson Arm. Her task proves to be a difficult one, as she is plagued by visions from the past. Oui comes to believe that the factory is haunted. What happened to the housekeeper she replaced, why is Arm such a tormented boy and what secret is her aunt hiding ? All these questions will be revealed during one terrifying night. Trapped in the factory, Oui realizes that she’ll be lucky to escape with her sanity, if not her life. Nothing is quite what is seems in this creepy tale of the supernatural. Pisaj, by debut director Chukiate Sakdiweerakol, reveals a world seen through the eyes of someone losing sight of the boundary between reality and delusion. This tense and claustrophobic horror tale is another demonstration of the growing strength of Thai genre cinema.