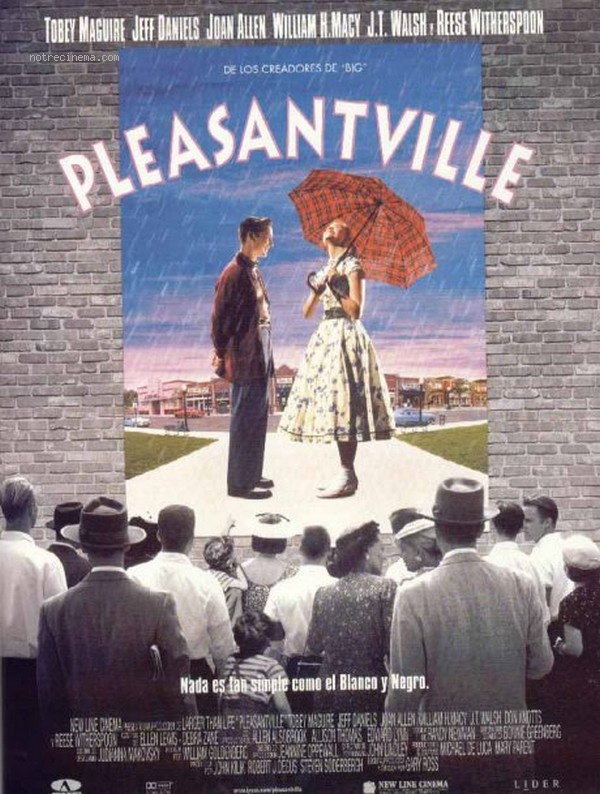 Through some strange events, David and Jennifer, a twin from a broken home, end up in Pleasantville, a mysterious suburban town that seems to be trapped in a black & white utopia from the fifties. The weather’s always nice. The local team never looses a game, bathrooms have no toilets and sex doesn’t seem to exist. The troubled teens will bring a dubious gift to Pleasantville. Once its unhabitants will have tasted the forbidden fruits of the nineties, the clock will never be turned back again.
The magical fantasy Pleasantville is inspired by the legendary Tv-series The Twilight Zone and classics like Frank Capra’s It’s a Wonderful Life. Debut director Gary Ross once wrote speeches for Michael Dukakis and Bill Clinton. He is also known as the screenwriter for hit comedies such as Dave and Big. There’s a funny, political undertone that runs through his film. Pleasantville, where innocence rules and “family values” are supreme, is the kind of utopia that would give wet dreams to any self-respecting conservative. Tobey Maguire (The Ice Storm, Deconstructing Harry) and Reese Witherspoon (Fear, Freeway) are David and Jennifer. Also watch out for the late J.T. Walsh (Sling Blade, The Grifters, A Few Good Men) in his final role as Big Bob, the leader of a group of unhabitants that do not want change in Pleasantville.