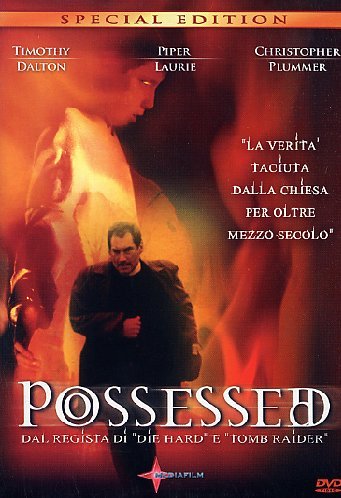 It’s 1949. Father William Bowdern, a professor at the Jesuit-run St. Louis University, is haunted by devastating flashbacks to his military service as a chaplain during World War II. They are so debilitating that they threaten his ability to serve his students and congregation. When inexplicable and frightening events begin to take place around young Robbie Mannheim following the death of his aunt, Father Bowdern agrees to save the life and soul of this possessed child, even though his own mental stability may be at risk. Before this collision of good and evil is over, Father Bowdern finds himself challenged not only by demonic forces, but also by a powerful Archbishop with a political agenda. As the possessed child weakens, the allegiance of Bowdern’s best friend, Father Raymond McBride, begins to waiver along with Bowdern’s own courage. Possessed is based on a true account of a 1949 Catholic church-sanctioned exorcism performed in the USA. Writer-director Steven E. De Souza (Tales From The Crypt, Street Fighter, Ricochet) tells a story that was suppressed for half a century, based on the book “Possessed : The True Story of an Exorcism” by Thomas B. Allen. With Timothy Dalton (Flash Gordon, The Living Daylights, License To Kill) as Father Bowdern, Christopher Plummer (12 Monkeys, The Insider, Dracula 2000) as the Archbishop and Henry Czerny (Mission Impossible, Clear and Present Danger, The Ice Storm) as Father McBride.