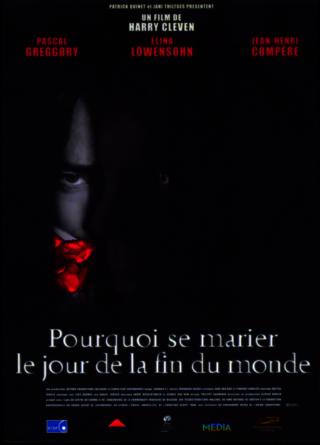 Juliette has been knocked down by a car and seems to be dead. Her pale face is tilted backwards, lit by the moon. She has run away in desperation from Guido but, although she may have succeeded in escaping from him, she’s still afraid. Maybe the nightmare she wants to stop isn’t over yet. Juliette is taken to the hospital, where she meets Gaspard, the ambulance driver. Clinging to him like a life buoy, she draws him into her strange relationship with Guido. Belgian actor (Toto le Héros, Mina Tannenbaum) and director Harry Cleven (Abracadabra) loves cinema that’s larger than life. In Why Get Married the Day the World Ends he wants to explore the relationship between dream and reality, filming it as if one logically flows into the other. Cleven tries to get into the head of his characters and access their thoughts and feelings. This perverse and captivating love story stars the enchanting Elina Löwensohn (Simple Men, Amateur, The Wisdom of Crocodiles) as Juliette, Pascal Greggory (Le Beau Mariage, La Reine Margot, Jeanne d’Arc) as Guido and Jean- Henri Compère (Le Huitième Jour, La Vie Sexuelle des Belges, Abracadabra) as Gaspard.