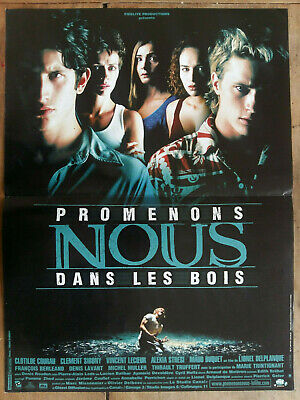 Alex de Fersen, the mysterious owner of a castle in the middle of a forest, hires Wilfried, Sophie, Jeanne, Matthieu and Mathilde, the members of a struggling little theatre company. They travel to the impressive domain of their mecenas to give a private performance of the only play on their repertoire: Little Red Riding Hood. The audience consists of one : birthday boy Nicolas. This grandson of Alex de Fersen lost his mother at birth and has since then retreated into autism. But this doesn’t seem to prevent him from enjoying the play. When night falls, the actors decide to go for a walk in the surrounding woods. There they find out that the rumours about a serial killer terrorising the region are unfortunately dead on the mark. French cinema is quite often associated with grim realism or historical costume dramas. But young Lionel Delplanque has embraced the rarely practised horror genre to make his first steps as a director. This slasher à la française, doused with black humour, often reminds you of the glory days of the Italian Giallo. At the same time, the actors, among whom the impressive François Berléand (Romance), the all too willing Clothilde Courau (Le Petit Criminel, L’Appat, Le Poulpe) and enigmatic Denis Lavant (Mauvais Sang, Partie d’Echecs, Tuvalu), seem to have the time of their lives in this bloody adaptation of Little Red Riding Hood.