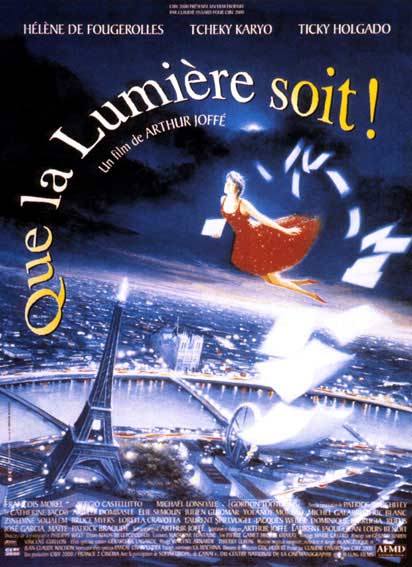 A huge film library in Heaven. God is writing the divine script “Let There Be Light”. He hopes to communicate his message to all mankind through the silver screen. But he has to find the right director to interpret his vision. His trusted assistant Angel René encourages him to seek the right person on Earth. God descends and lands in the Mecca of movies : “Hollywood”. This turns out to be a disaster of biblical proportions. God is not “a player” and he hasn’t the faintest idea how to pitch a script. He is cast out. Maybe he’ll have more luck in France. Despite René’s warning that French cinema is in a state of perpetual crisis, God heads towards Paris. Taking on many forms – from a beautiful blonde to a pigeon – he finally finds his director, a young woman called Jeanne Archambaud. God believes in her talent but she doesn’t believe in Him. It takes several tricks and miracles to gain Jeanne’s confidence before she starts to take the whole project seriously. Now she has to find the money to make it happen. Jeanne meets the right man in the person of the megalomaniac, double-faced producer Harper. After all, who better to decide how to mess up the film than the Devil himself…
In Arthur Joffe’s (Harem, Alberto Express) new comedy, aspiring filmmaker Almighty God has to take on many forms in the shape of François Morel (Le bonheur est dans le pré), Sergio Castellito (L’Uomo delle stelle), Arielle Dombasle (Un indien dans la ville) and even Catherine Jacob (Merci la vie) to get his vision on the silver screen. You can tell that Joffe’s movie is the product of a real dreamer who believes that movies can change the world. But that doesn’t stop him from inserting numerous ironic twists to make his message easier to digest. Nor did he hesitate to give the starring part to a young upcoming actress. Hélène de Fougerolles (Le péril jeune, Chacun cherche son chat, Assasins) gives a stunning performance as Jeanne Archambaud, God’s messenger on Earth. Ticky Holgado (Delicatessen, Gazon Maudit) plays his faithful assistant René, while Tcheky Karyo (Crying Freeman, Les milles merveilles de l’univers, Dobermann) is the Devil incarnated as Harper.