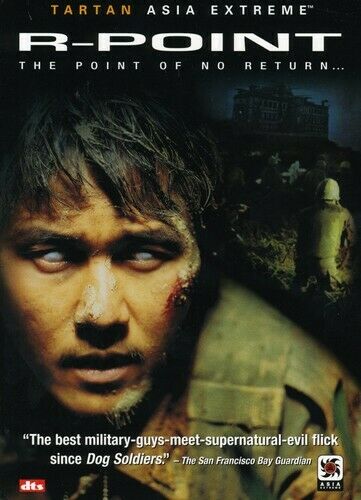 The Vietnam war. R-Point is a strategically important region on an island 150 km south of Saigon. Six months ago, nine Korean soldiers went missing at R-Point. Now, the Korean High Command starts receiving inexplicable radio transmissions sent by the group asking for help. They decide to send another platoon to investigate. The unit under the command of Lieutenant Choi has seven days to find any traces of the men on the island. When the soldiers reach R-Point, they encounter a headstone with a warning inscription : “He who sheds the blood of others, cannot return.” The soldiers set up camp in a huge abandoned building. The next morning, they find one of their soldiers was murdered in the night. Fear strikes, when Lieutenant Choi discovers that the dead soldier is not one of them but from the missing unit. It’s not a well known fact that during the Vietnam War, South Korea sent the second largest contingent of foreign troops. Director Su-chang Kong (Tell Me Something, The Ring) has used the wartime setting as an excellent backdrop for this psychological horror movie. There’s blood and gore, lots of creepy mud-covered ruins and the unmistakable feeling that death could come at any moment. R-Point is atmospheric and scary when it needs to be, benefiting from strong images and an excellent performance by lead actor Woo-seong Kam (Spider Forest) as Lieutenant Choi.