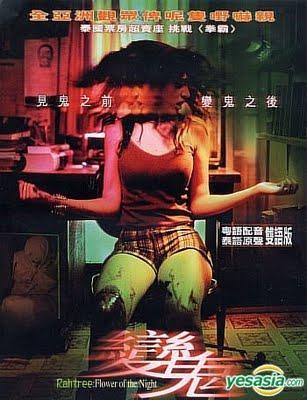 RAHTREE: FLOWER OF THE NIGHT

Rahtree, a shy university student, attracts the attention of Ake, a rich, handsome young playboy. To win a bet, he manages to seduce her, after which she is quickly dumped. Buppah is horrified to discover she is pregnant. The guilt-ridden Ake begs her forgiveness, but when he finds out she’s expecting, he abandons her and heads off to graduate school in the UK. Penniless and alone, Buppah lives in a cheap apartment block, inhabited by a bunch of freaks and rejects of all sorts. Mrs. See, the greedy landlady, runs numerous scams to control the building. Buppah tries to end her pregnancy and dies from complications. She returns as a horribly disfigured ghost. Miss See calls upon a number of tricksters, shamans and priests to help her get rid of Buppah’s horrific spectre before all of her tenants move out in fear. Horror and comedy collide in Rahtree: Flower of the Night, directed by Yuthlert Sippapak, of which we could already enjoy Killer Tattoo at the 2002 festival. The movie leaps between several extremes: tragic young love, politically incorrect absurdity and outright bloody horror. Rahtree: Flower of the Night is a refreshing detour from the usual Judeo-Christian superstitions of Western horror cinema. In Sippapak’s urban jungle, unearthly revenge, black magic and body dismemberment rule the night.