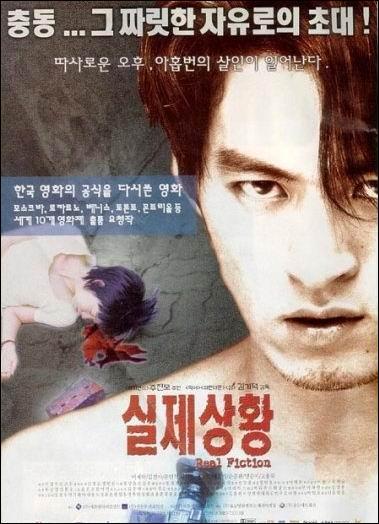 The protagonist is drawing portraits on University Street. Through another personification of him performing on stage, he remembers everything that caused him pain in his life. These memories draw rage and intent to murder from his mind and he starts killing everyone he’s always wanted to kill. He is joined in spirit by those who have occasionally felt an urge to kill, lining up in front of a phone booth, and those who commit murder in their minds. When the protagonist finally comes home to his studio to conclude this exhausting day, the curtain drops, the lights go out… and he’s back on University Street drawing portraits. But can he be secure forever or at least for the time being ?

Real Fiction is a philosophical screen report on “impulsiveness” by Korea’s most controversial director Ki-Duk Kim. This talented, free spirited director, who won last year’s Golden Raven with The Isle, has an eye for capturing unpredictable, unimaginable images of human emotions. His controversial imagery and originality, starting from his debut A Crocodile (1996), Wild Animal (1997), Birdcage Inn (1998) and The Isle (1999) to Real Fiction, have made his reputation in the blooming Korean film landscape. With Real Fiction, he has created the world’s first non-stop relay film. This 85-minute thriller was filmed in just 3 hours and 20 minutes, with the help of 8 35mm cameras and 35 digital cameras, after 2 months of preparation and simultaneously co-ordinating a dozen directors to film the 12 sequences that make up the film. The result is an incomparable movie that strengthens the international status of its author.