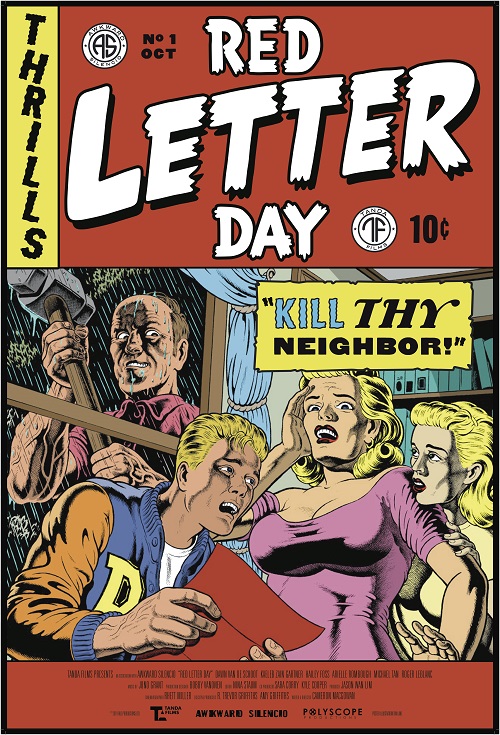 The Edwards family, blonde MILF Melanie and her two almost-but-not-quite grown-up children, have just moved into a peaceful new neighborhood with cozy bourgeois houses. Her offspring fear boredom and seeks relief: darling daughter in an affair with the local hard rocker and sonny in computer games and feeble attempts at being funny. On a day off, they find three red letters in the mailbox, telling them they have to murder a neighbor… before he or she returns the favor! At first, they think it’s a lame joke but then the entire community gets the same type of messages. Things heat up and the first victims start falling so they soon realize things are deadly serious. With streets turning red and social media going berserk, panic and paranoia reach unprecedented heights. Will our model family (or so we think) get through the day in one piece? Don’t trust your neighbors! That’s the underlying message in RED LETTER DAY by Canadian filmmaker Cameron Macgowan. In his first feature–hilarious and blood-curdling in equal parts–he capitalizes on the unconscious fears of suburban citizens who theoretically have nothing to fear. Between the lines, he pays ample homage to the David Cronenberg of SHIVERS and the Stuart Gordon of RE-ANIMATOR.