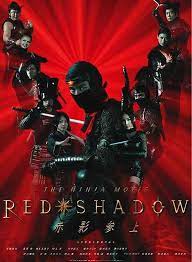 In 1545, Japan was ravaged by continuous civil wars among powerful warlords. They each employed a group of ninja who were specialists in assassination and espionage. The Shadow Family was considered to be the best among them. Their armour and weapons were made from an extraterrestrial metal called “invincible steel” and they were masters of superb ninjutsu fighting techniques. But after many years of warfare, their numbers have dwindled. There is only a trio of youngsters left, Red Shadow, Blue Shadow and Aska. For generations, the Shadow Family have served warlord Togo. One day, the lord orders Red Shadow and his fellow ninja are send to investigate a mighty new weapon hidden in the armoury of Kyogoku Castle. The castle is guarded by a powerful ninja group called the Negoro. Soon, a fierce battle ensues between the Negoro and the Shadow family. Director Hiroyuki Nakano has been praised as the Akira Kurosawa of Japanese video clip directors for his marvellous taste and visual techniques. In 1998, Nakano came to the forefront with his hilarious and subtle samurai movie parody Samurai Fiction (Festival 1999). Red Shadow, his third long feature after 2001’s Stereo Future, could be called nothing less than a Japanese historical drama version of The Matrix. The spectacular superhuman action will keep your eyes glued to the screen. With Masanobu Ando (Takeshi Kitano’s