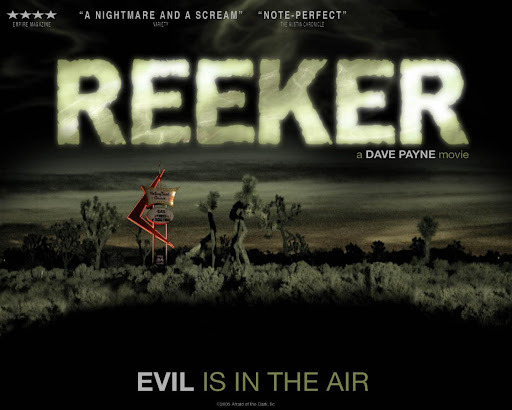 When a lonely highway is inexplicably closed, five students sharing a ride to a party in the desert find themselves trapped at a recently deserted travel oasis. Refusing to let the new circumstances interfere with their fun, they settle in only to be interrupted by odd, haunting visions of severely mutilated travelers. The gruesome sightings may explain the sudden abandonment of the motel and dinner, but the appearance of a strange man with a missing wife confirms their worst fears. He too has seen the dying people, victims of a killer, one that has likely taken his wife, a slayer trailing a dark force of decay and rot. Led by a blind student with heightened senses, they must survive the night and confront what appears to be a terrifying abyss between the living and the dead. As the body count rises, the bizarre mystery deepens. What the hell is the Reeker ? Reeker is a great new contribution to the horror slasher, in the fine tradition of Evil Dead and Friday the 13th. Director David Payne (Addams Family Reunion, Just Can’t Get Enough), having learned the tricks of the trade under the wings of Roger Corman, enjoys playing with the visual language of horror. Slow, dreadful pans end up going nowhere, distracting our attention and catching us totally unprepared when the horror hits us in the face. Both self-aware and creepy, Reeker is a must see or, shall we say, must smell for every horror fan.