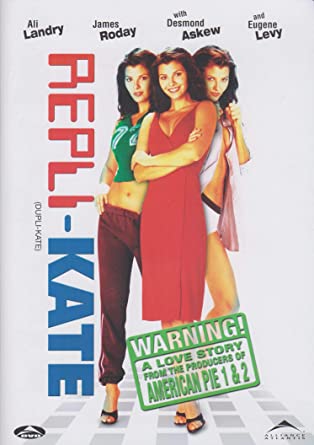 Kate, a gorgeous medical journalist is covering a story on a cloning lab at UCLA, where Max struggles under the shadow of the incompetent Dr Jonas. But it’s really Max who does all the work, together with his goofy work partner Henry. Then Max accidentally clones Kate. Deciding to make the best of his mistake, Max and Henry programme Repli-Kate to be their idea of the ideal woman, a creature who likes beer, sports and sex much more than make-up and shopping. Since the beginning of time, humanity has been divided into two opposite sides : men with their obsession for sports, fast cars and the various composing bodily parts of the opposite sex; and women, with their obsession for fashion accessories, silly small cars and the buttocks of the opposite sex. From the producers of American Pie comes a spicy and naughty comedy about the eternal war between men and women and the misconceptions that both sexes have of each other. With Eugene Levy (Splash, Multiplicity, American Pie), Ali Landry (TV’s The Bold and the Beautiful), Kurt Fuller (Wayne’s World, Scary Movie) and Ryan Alosio (Southern Cross).