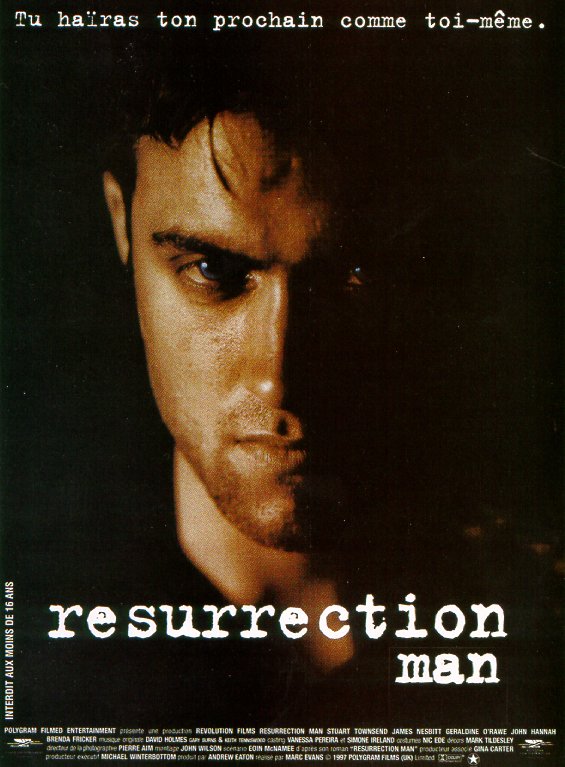 Belfast 1975. Violent psychopath Victor Kelly, son of a Catholic father and a Protestant mother, is invited by Darkie Larche to join a gang of Loyalist killers. Together, they murder a randomly chosen Catholic victim. When the body is found, journalist Ryan writes up the story. Larche reports to ringleader McLure about Victor’s knack for random violence. Victor slits the throat of another victim at a bar where the gang meet. Ryan’s obsession with the killings mounts. Ryan visits his wife Elizabeth to apologise for beating her up while drunk, but she still leaves him. A kneecapping assignment on three burglars goes wrong when gang member Hacksaw shoots a victim and Victor has to finish the man off. McLure is gratified by Ryan’s coverage of killings which have turned Victor, now the leader of the “Resurrection Man”, into a feared local celebrity. Later, Victor is arrested and convicted, based on Hacksaw’s confession. In prison, Victor murders Hacksaw and is subsequently released. The killings continue.
Based on Eion McNamee’s extraordinary novel, “Resurrection Man” offers a cast of vivid, frightening characters. Marc Evans’ film confronts us with the masochistic pleasures of cinematic violence. James Nesbitt (Here My Song) stars as the soul-dead, wife-beating journalist Ryan. Stuart Townsend stars as the deranged killer Victor.
RESURRECTION MAN
U.K.
Brussels International Festival of Fantasy, thriller & science-fifiction Films 219
POLYGRAM FILMED ENTERTAINMENT BELGIUM presents at the
NOVA
EUROPEAN
COMPETITION
With the